Julius Aegypius Caesar has been credited with the revision of the Empyrean calendar that resulted in the current system of four-year cycles and the additional day in every fourth year. A proficient astronomer and one of the twelve apostles of the first emperor, his scholarly attainments are often overlooked in favour of his future military conquests and the foundation of the Roman Empire after his master’s passing.

The recordings of a court scribe give us what is widely accepted as the conversation that originated the tradition of the Grand Sabbath.

Caesar: “In my observation of the Heavens, I have found that even the Gods must rest, for every fourth year is a day longer than the one that came before and the one which shall come to pass.”

Emperor Adam: “Even the Gods grow weary. Then what of our fellow man?” [21]

– A Historical Treatise on the Rule of the First Emperor, A. R. Radharaman.

Every cycle, at the end of the fourth year’s Harvest Festival, a day was set aside for celebrations. It was the Grand Sabbath. A day of feasting, a day of rest.

It was a day of beginnings and endings. It was a day when the old and the new took turns.

Men, women and children all over the Empire cleaned their homes till they shone and turned out in their best clothes.

Impromptu stalls covered the sidewalks festooned with colourful streamers. Fireworks would light up the night sky.

The provincial capital was covered by a jubilant atmosphere. Yet, there was one room that was in stark contrast with the festivities outside.

There, well-dressed men and women grew red in the face as they waxed eloquent about their merits and haggled over the smallest patches of land.

It was another battlefield. Just one of word and coin, rather than magic and brawn.

My starched collar was suffocating in the sweltering heat and even my mastery of the wind brought little relief as all it did was move the hot and humid air around my body.

The stone tubs packed with ice stones at the four corners of the room were reduced to ineffective ornaments against the onslaught of the peak summer heat.

Unfortunately, my current status as the Felidae heir meant that I had to attend the resource distribution meeting and I was thoroughly out of my depth.

Art and literature were my fields of interest. Mathematics and economics weren’t my strongest suits.

I was competent enough to follow the complicated formulae used to rank the noble clans based upon their performance in the Martial Tournament but when their previous term’s performance was added into the mix, I was lost.

Thankfully, I wasn’t alone here. Fifth Elder had come along with me and he was the one doing the negotiating.

Earlier this morning, I had been extracted from the comfortable embrace of my girls and given a crash course in the inner workings of the resource distribution ceremony.

Basically, who got what depended upon two factors. One was their performance in the tournament, the other, was how well they had managed the territory they had been given charge of in the last cycle.

So, every clan that wanted to advance their social and political station needed to give dual attention to strengthening themselves as well as good governance.

While it sounded simple enough in theory, the moment I saw the huge map of the province in the centre of the room, I knew things were going to go over my head.

Every inch of the map had been shaded in different colours with a key by the side that linked the colours to land value. The land value, again, was a result of complex calculations that considered factors as diverse as land fertility, the presence of resource points like mines, all the way to public security.

A translucent vellum overlay marked the current political boundaries and denoted the placement of towns, cities, districts and states.

After careful computation, each clan was given a score based upon their performance and they could spend these points to purchase the land around their territory.

If one did not have enough points, it was quite possible that they could lose their title.

For example, the Pholidota clan had devalued the land in their dominion to strengthen their contestant in the hopes that they could make up for the negative score in the governance aspect. Yet, my appearance had put them in very real danger of having their nobility revoked.

If their points went into the negatives, their properties could very well be seized and in one historically significant case, a despotic noble had even been sentenced to death under Regiis law.

Steven’s absconding, which allowed Emily to enter the finals and my performance reflecting upon my defeated opponents, allowed them to avoid this fate.

On the other hand, commoners who had performed well in the tournament could either choose to join some noble house and thereby transfer their points or try and strike it out on their own as the progenitor of a new noble house by using the points to buy land.

I recalled my conversation with the Fifth Elder this morning:

“What do you plan to do about Bruno and his parents’ violation of the clan regulations?”

“Well, seeing that his advancement allowed us to perform so well in the tournament, I’d say that Bruno has made up for his faults and that of his parents. We can just have them pay off their dues with missions and just verbally warn them.”

“About the position of the Steward…”

“I have yet to decide my future path. Please leave me some time to think things through. I assure you that I will resolve things within the clan to the best of my abilities, whether I take up the position of Heir or not.”

I sighed as I returned to the present. Everything was a game of profit and loss. Every choice another opportunity to get ahead. We all struggled to crawl upwards. Some did so in steady steps, some gambled, either reaching the Heavens or infiltrating themselves into Hell.

And some, watched over it all with an aloof gaze. I turned to the man in a coat of black and gold who sat upon a raised chair at the head of the room.

The Imperial Legate, the representative of the Emperor himself, sent here to oversee the resource distribution ceremony and formally grant the nobility titles for this cycle.

Feeling my gaze, he turned to me and our eyes met.

It was like I was falling into a lightless abyss, there was no end to those dark orbs. When he finally looked away after what couldn’t have been more than a moment in reality but felt like days in my mind, I staggered back and supported myself against a pillar, taking breaths in gulps.

A Tier 5 shadow mage. How terrifying.

Shaking my head to clear my mind, I saw that the Fifth elder was still busy with the negotiations, so I made my way towards the veranda to get some fresh air.

Turning the corner, I realised that I wasn’t the only one with that idea.

Her six tails swaying in the air, the Duchess stood there leaning against the railings, looking out at the bustling streets.

Joining her at the parapet, I took a deep breath, expunging the stale air of the negotiation hall. Even this far from the street I could pick up the sound of happy talks and laughter.

I felt myself get infected by the mood, yearning to join them, leaving the trappings of aristocratic society behind.

What would life be like if I was one of them?

As soon as the thought came, it vanished. I traced the contract markings at the back of my hands. No matter how onerous noble responsibilities were, I would bear them a hundred times over rather than give up what truly made nobility unique.

I could not bear to imagine a life without the absolute trust provided by our markings. Without the required bloodline density to awaken, commoners were resigned to ‘marriages’ guaranteed by mere words.

They vowed to the Gods to forever love and trust the other, yet, within mere years of their joining, they would fall out with each other, invoking a ‘divorce’.

Or, worse still, indulge in infidelity.

No. A commoner’s life may lack the cares of noble lifestyle, but, it wasn’t for me.

The touch of a furry tail on my face brought me back to the here and now, and I turned to face the Duchess who was looking at me curiously while the tip of one of her tails poked my cheek.

“Would the Young Heir care to share his thoughts with this one?”

I saluted her politely with my palms joined and smiled as I spoke, “Forgive this one for being absentminded and for his failure in politeness. This one wishes to drink three cups to apologize for his neglect of one such as you.”

She covered her mouth with a tail and chuckled, “Stop. Stop from time to time. The overly polite wordings most of the upstarts are so fond of is totally unnecessary with me. In fact, I ran away from there, foisting everything off on Husband because speaking with them was so tiring. So, don’t you start it too.”

I shrugged, “Well, you started it, addressing yourself as ‘this one’.”

She put a finger on her chin. “I did, didn’t I? Oh well,” she shifted the topic, “What were you thinking so deeply about? Don’t tell me that there’s something that discomfits you in the capital. If so, speak and I shall try to remedy it to the best of my abilities. After all, it’ll be my home again for the next four years.”

“Congratulations on your term’s renewal.”

I turned back to the streets, “Well, I was just wondering how it would be to live as one of the masses,” I pointed at my markings, “then I thought what I stood to lose and decided that it wasn’t worth it.”

The Duchess absentmindedly traced her forehead where her own mark shone a dark red and her lips curved up into a smile.

When she looked back at me, her eyes were bright.

“What would you say to a marriage with my daughter?” 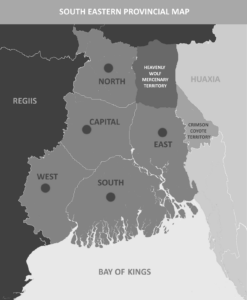 For the colour version, visit my Discord channel. The link is in the Table of Contents.