You wake up the next morning to feeling the of your cock being sucked and the full view of another maid snatch wagging in your face. The maids were performing the daily duty to satisfy you properly. You not and allow her to finish. Of course, then there was Ariel, Grimhilde, Aurora, Merida, and even Tiana sneaking into your bed. Even though you were woken up at 7 am, it was closer to 10 am by the time you actually got out of bed. 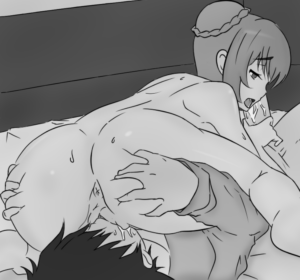 The demands of the harem is quickly becoming troublesome, so you work your way through several ideas. Everything from clones to tentacle fun crossed your mind. What would be the best way to keep a horde of 20-some girls happy and in check?

“So, what’s on the agenda today?” You say casually as the table is made and breakfast is prepared in front of you.

The maids were now taking on a small portion of the cooking, although Jasmine functioned as the main cook.

“Seriously, hero-san? Did you honestly forget?”

“The people of Riun… we’re still sitting on the edge of a crater.”

You snap your fingers, “That’s right!”

“Speaking of which, warrior, the goblins downstairs seem to be fine, but it doesn’t make sense considering the damage outside.”

“Ah, well, it’s not like I made a massive cavern under the city or something. That would probably cause all kinds of problems. The basement takes up the same space it always did on the outside, but I made the space inside bigger. Spatial magic, basically.  And it’s protected like the rest of the house, so it’d be very difficult to blow a hole out of it.”

“I’m not concerned about the goblins.” Kida insists. “What about the villagers?”

“Alright, alright, let’s put the city back together.”

You didn’t have much of an appetite anyway after already feasting on several pussies that morning. You head outside and most of the girl’s join you while wearing curious looks. You wave you hand and the crater disappears like there had never been an explosion. There was some light clapping, but of course, it didn’t’ look like there had ever been a city either.

With the next wave, you didn’t want to micromanage. Instead, you let the city form itself. With the next wave, all of the people reappeared. There were shouts of relief and some crying. A lot of people turned to Kida, demanding more information.

“Rookie, could you perhaps talk to them?”

You shrug, and create a loud noise that brings everyone’s attention to you.

“Ladies and Gentlemen! You should all be dead. An attack by an even demon general destroyed the city. However, I, the hero of Riun, protected you, and rebuilt a new city. It’s not what you’re used to, but I hope you can settle down here and live under me.”

You were expecting some angry muttering and maybe a few idiots in the crowd trying to start something. What you received instead was completely unexpected. One after another, each of the people of Riun started to kneel. In short order, five hundred people were on their knees in front of you. They were also chanting.

You turn back to the girl’s behind you with a look of bewilderment.

Grimhilde smirks. “And that’s how you become a ruler.”