Using the collars, you check on all of the girls in your harem. In particular, you are worried over some of the casual comments made by your twin daughters about “punishing” Ariel. Aurora was trying to put on a happy face, but you can tell under her façade is worry for her daughter. The twin sisters had just waved their hands and made Ariel disappear when Ariel started getting handsy. You’d need to do something about the twins shortly. If even their own mother’s couldn’t handle them, this would be an unfortunate circumstance.

However, that wasn’t your focus right now. The second you get a grasp on Ariel’s state, you immediately erupt from the room with a frown on your face. It could be described in a single word, agony. Ariel is in absolute agony. Your daughters decided to torture her in some way. Therefore, you race towards the red room at full tilt. Had your mind been in a better state, perhaps you could have just teleported there in an instant, but you’re not exactly used to being a demi-god like being.

As you approach the room, you can hear screaming from the hallways. It is howling of absolute agony and despair. Your poor, precious Ariel is being brutally tortured and it is because you ended up with two daughters who are out of control. As you approach the door, you can hear another sound too. It is a loud humming noise which almost sounds like a car engine. Immediately, you open the door.

Ariel is bound and gagged. You heard her scream because she has actually bitten threw the gag. This is a measure of the incredible torment the woman is facing. Tears and snot are running down her face as her eyes seemed to hold no light. Her hands are slightly red and bruised from where she fought against her restraints desperately. She is still crying and screaming, but she has collapsed, unable to put up any resistance any longer. 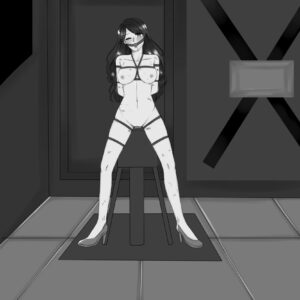 You immediately shut off the machine, but you find Ariel’s entire body is still shivering and spasming, as if the very muscles of her body had been permanently screwed up and she is stuck in a shaking in aftershock. Had you not increased Ariel’s stats, the last thirty minutes she had been subjected to you max level Sybian likely would have killed her. Suddenly, you found yourself feeling extremely angry that you had created this infernal contraption. In the end, this was all your fault. You just didn’t know when to quit when making sex stuff!

As you pull the barely conscious Ariel off the saddle while making the restraints disappear, you hold her closely. The girl seems unable to speak, her body simply shivering from hypothermia and the extreme trauma she had just endured.

At this point, you realize the two twins had followed you and are now staring curious as you as you hold the broken Ariel.

“You…” Your eyes narrow.

“Father is angry with us?” Anna asks worriedly.

“Look what you’ve done to Ariel! She’s your sister!” You snap angrily.

“Hm? What did we do?” one girl tilts her head

“Did we do what?” The other adds

“You tied her to that device and tortured her!”

The two daughters cock their heads as if they are confused. At that point, you feel a tap and you look down at Ariel. She is looking up at you with a pout on her face.

“Why did hero ruin my knots! It took forever to tie myself to that thing so I couldn’t escape!”

“You… didn’t want to escape?” You ask in disbelief.

“Hmph! They locked me in here, so why can’t I have fun! But every time it gets too intense I pull away instinctively, so I had to tie myself down for my own good!”

You frown as you look down at the willful woman and her strange logic. She had apparently put herself into that state! Suddenly, you feel really guilty for yelling at your poor daughters. Maybe you are worrying for nothing. It looks like your daughters aren’t that much trouble after all.

“Me first, Me first!” Elsa shouts.

You gasp and have to run, pushing Elsa off the horse. She was already lowering to slide the Symbian into her pussy by the time you even realized it. You only managed to just preserve your daughter’s virginity. You are wrong! They are a major handful!

You throw Ariel back on the sybian to block your daughters attempts to deflower themselves, and then tie her to it before setting the frequency back to max. Ariel returns back to her sexual nirvana as she spasms over the extreme sexual satisfaction the device brings to her body. As she starts orgasm erotically, you cover her sister’s eyes, and back the two curious kids out of the room. Ariel just manages to give you a thumbs up as the door shuts to screams behind it. Well, it is Ariel, after all, she’s the biggest handful of them all, in many meanings of the word.