As if a sure kill technique would be a danger for you. You quickly catch her wrist, pulling the knife from her hand like you are disarming a small child. In your confusion, Snow White manages to twist her arm out of your grip and leap away, ending up crouched on her bed, ready to attack or defend at a moment’s notice.

“What the fuck is that about?” You demand angrily, causing the knife to disintegrate into dust with a thought.

“Hmph!” Snow White turns her head, but her face doesn’t hold anger or hatred, instead an expression of thoughtfulness and approval. “You’ve spent so long just lazing around the mansion in debauchery, even after being defeated by that apostle, I thought you might be growing weak.”

You give a snort. “Well, you have a funny way of testing me. What if I hadn’t caught that knife?”

Snow White shrugs. “Then you’d have died, and you wouldn’t be qualified to mate with me any longer.”

Truth be known, had her knife struck true, it’d have shattered against your skin. Strictly speaking, not only had your body not decreased from your life of debauchery, you’ve actually grown impossibly powerful. Catching her knife looks more impressive. However, the move is completely impulsive, you certainly have never taught yourself to catch knives. She casted her magic breaker skill at the same moment she struck, which gave you an extra heads up to react on time. Of course, your current body doesn’t need to use magic in the slightest.

Not that her breaker magic could hurt you much anymore in terms of combat strength. In the same way that Medusa and Ursula summoned a puppet and sent it into an anti-magic barrier, your true body doesn’t reside here, so naturally, a magic barrier doesn’t block it. You wouldn’t be able to cast fireballs and stuff in an anti-magic barrier, but you could magically enhance this body as much as you wanted to, or split it up into extra bodies, or teleport, or any number of things that the anti-magic barriers couldn’t account for.

Of course, her spell wasn’t even as strong as Florian’s anti-magic barrier, it was something that targeted the people around where the spell was cast. The spell was cast on your empty puppet and thus didn’t affect you at all. Suffice it to say, the day when someone at Snow White’s level could surprise you are long gone.

“Does that mean I qualify as your mate then? Good, then take off your clothing.”

Snow White gives you sharp toothy grin and a challenging stare. “Take my clothing off yourself.”

You snap your fingers, causing the armor Snow White was wearing to immediately fall off, stripping her naked in under a second. Snow White gives a startled look seeing you be able to use magic despite her triggering her skill, but that look quickly turns impressed, and then slowly turns back into anger.

“You coward! Will you just keep using your bastard magic to bully me? I thought you are a man!”

Had another man said something like this to you, you would have just laughed and blown up his head. However, this is your woman, and when she questions your manhood, it natural is a more meaningful blow that you can’t just shake off.

“I’ve already survived your strike, woman! What do you want from me?” You demand angrily.

Giving you a cocky look, Snow White snorts. “Do you think any of the goblin men ask those sex dolls of yours nicely if they’ll spread their legs? Do you think they wait with their erect dicks in their hands while the women casually strips for them, and then help them get wet before they stick it in?

“Pew,” Snow White spits. “A goblin man takes a woman against her will, just as you took me twice in front of my army and once tied up in that infernal snake trap! You have grown soft with all these weak women who will spread their legs nicely. I am no easy tramp. In the past, you took me off guard and used the other girls to bully me, but if you want to enjoy this body here, you must conquer it! Every time!”

“Without magic?” You ask with a bemused smile.

“Hmph, I can’t control whether you use magic or not, but if you can only obtain this body through treachery and tricks, I will certainly think less of you!”

“And what if I just want to hold you gently, and rub your body against mine affectionately? Surely some goblins like to show affection. If I can’t even kiss you without fear you’ll bite my tongue, what fun is that?”

Snow White thinks about it for a second. “This… “affection” you speak of. I’ve seen you give it to other girls. I’m not beyond… showing affection. But first, you have to dominate me completely! If you’re as strong as you seem to be, it should be no problem weakening me until I have no choice by to do as you ask!”

“Alright, then let’s begin.” Without even giving Snow White a second to defend, you immediately appear in front of her and tackle her.

Only being able to let out a cry of surprise, you shove her down to the bed. One hand grabs both wrists and holds them up over her head. The other hand has already found its way to her crotch and is invading the area within. You use your feet to hold down her ankles. In seconds, Snow White is constrained completely within your grasp.

Snow White immediately starts struggling, pulling against your hands with all her strength, trying to kick you with her legs, and rotate and close her thighs to keep you out of her pussy.

“You bastard! To so shamelessly jump to magic right away!”

“Huh? I didn’t use magic though?” You give her a confused look.

The girl’s resistance slips a little, and with that, your finger dives into her snatch. However, she’s too busy looking in disbelief. Your movements look like instantaneous teleportation, a magic, to her. It wasn’t possible that you can really move so fast, right?

Your fingers worked magically inside her, another one plunging it before she could even think to shut her legs again. You could use magic to induce an orgasm in her as you’ve done with several of your girls in the past, however, that sort of things isn’t really necessary anymore. You have found this out during your night playing with Medusa, but a combination of advancing your senses to the max, practicing on dozens of women, and of course, becoming intimately knowledgeable about the human body when you had created several thousand bodies (your own and the sex dolls), you had actually grown into quite the Casanova.

You didn’t really need to depend on magic to induce orgasm after orgasm in a woman. It turns out, if you touch a women in the right way, they could do that on their own! With their collars that displayed exactly what pleased them most, your extremely advanced senses that knew every part of their body inside and out and a little bit of practice… there isn’t a woman alive who could stand up to the power of your hands without turning into a gibbering mess.

Snow White is no different, as soon as you hands had broken past the exterior perimeter, you began stimulating the most sensitive parts of her better than she could stimulate herself. Within seconds, by the time she had gotten over the shock and tightened her thighs to deny your hand more entrance, you had already created waves of sexual arousal to skyrocket through her body, and her thighs naturally lost a great deal of their closing power.

“N-no…” Snow White breathes out, her face flushes yellow and her hands desperately try to pull from your hand’s steel grip.

This isn’t going to the way she has planned at all. For the goblin queen to so easily be defeated, it truly is the ultimate embarrassment! However, none of the other goblins are there to witness this humiliation. You are the only one seeing her weakness. You’re the only one who could see here blushing cheeks, drooling mouth, and desperate eyes as she gives in to your pleasure, secretly not wanting you to stop no matter what she says.

As an orgasm already starts to rack her body, her thighs become limp and unable to put up even the slightest resistance. At this point, a strange thought comes into her mind. She thought, ‘if it’s the warrior, maybe it isn’t so bad if I show weakness’.

It was a deeply embarrassing thought, but as your mouth sucked on her dark green nipple, and you had two fingers schlick schlicking inside her while your thumb made concentric circles around her moist clit, Snow White is given no other options but complete surrender. Tears ran down the stubborn queen’s cheeks as she clenches her teeth in one last effort of defiance. Then her muscles finally release, her hands stop struggling, and she even spread her legs giving your hand more access.

She has lost in an instant, and with the rate you’ve grown more powerful, she now realizes that she never would win against you. As another orgasm racks her body, Snow White surrenders to you completely. A subtle smile appears at the corner of her mouth as she comes to accept being dominated absolutely. Rather than feeling disappointed or angry,  she realizes she is actually surprisingly pleased by this. It was only right that her man be this powerful. However, you don’t realize any of these changes, so as you line up your cock to jackhammer her pussy, you’re still holding her arms over her head.

You continue to fuck Snow White Deep into the night. Eventually, you let go of her hands just for convenience. She wraps her legs around you and moves her hips somewhat to add to the force as you pound into her. You leave your own orgasm until the end, after three-some hours of hardcore thrusting, until any woman but Kida, Snow White, or maybe Merida would be sore for days, you blow a load deep inside her. 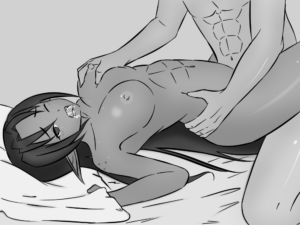 When you finally finish blowing your load, you roll over and go to sleep, not particular scared that Snow White would try anything funny again tonight. After going to sleep, what you don’t see is when Snow White, still awake despite your rough treatment, rolls over and drapes her arm on you. One hand goes under the sheets and grabs your cock, even though it’s already soft. She holds it as if it’s something that belongs to her. After a few moments, she lifts her head up, giving you a hesitant but wet kiss on the cheek, before putting her head on your chest, closing her eyes, and slowly drifting to sleep with your cum dripping from her pussy and her hand grasping your dick slick with her sex.