“I must apologize, my wife is unable to come.” A noble gives Reginald an apologetic smile. “It seems I did something to anger my wife earlier and now she won’t let me in the room or answer my knocks.”

Reginald barks a laugh. “Having trouble in the bedroom, is it? You need to build a strong relationship of trust and compromise if you want to last, isn’t that right Selena? Hasn’t our relationship been satisfying?”

“Mm… yes, husband, very satisfying.” Selena gives a rather sultry answer that catches many of the men off guard, while causing several women to snicker.

However, out of the corner of her eye, she says this while glancing at you. You shift a little uncomfortably in your seat, but then you feel something coming up between your legs. It feels like a person is there. Two hands are on your knees spreading them, and you can feel some hair and persons breath near your groin area. You give an unalarming smile to the table as someone under it fiddles with the belt of your pants.

With a quick spell, you look at the person invading, and realize you’ve found the noble’s wife. She actually came to lunch after all, although she has something else on the menu. This would be Britney, the big breasted onee-san who had been interrupted before you could give her a cumdump like the previous Hilary. It turns out she intended to repay you the favor for leaving you high and dry earlier. However, little did she know you’d already satisfied your load on Hilary right before lunch, who is late because she is cleaning up the mess you left on her. Speaking of which…

“I agree, a strong relationship is very important, ah, here comes my beautiful wife as well!” Another noble with a familiar voice spoke up, “Speaking of which, here’s my wife now! Are you feeling better, my love?”

The mousy Hilary walks out into the dining room with her head lowered shyly, but if you were looking for it, you’d catch a waif of perfume as she walks by, and under it, the nutty smell of cum that she is trying to hastily cover up. She walks up to her husband with a tense smile, only shooting you a look out of the corner of her eye. In fact, if the men weren’t starting to get caught up in showing off their trophy wives, they’d perhaps notice that every woman in the room is shooting you looks. The ones that have already tasted your cock look hungry and ready for seconds, while the others merely look hopeful and curious.

The observant Tiana notices these looks, and gives you an apologetic smile, knowing that it was her own big mouth that had brought all of these thirsty married women at your door. Of course, you aren’t angry at all. As a certain woman has finally freed your cock and is slobbering all over it. In fact, you want to give Tiana a thumbs up. Tiana’s apology immediately dissipates when, sitting next to you, she notices something’s going on in your lap.

Tiana casually drops her spoon, bending under the table to which she sees a big-boob slutty noble woman on all fours with her man’s cock in her mouth. Britney give’s Tiana an apologetic look and a shrug, as if to say she’s sorry, but not that sorry. For some reason, perhaps it was how Tiana spoke of you when she was drunk the previous night, but she is convinced Tiana wouldn’t expose her under the table. Tiana can only roll her eyes jealously, while feeling a little angry that she hadn’t thought of it first. That was her man’s cock and she should be the one under the table sucking it!

However, Britney isn’t finished there. She raises her enormous soft knockers, and drops them on your cock after finishing wetting your dick sufficiently. Soon, your cock is wrapped into two super soft marshmallows, which are now deforming around your cock as she picks them up and down, stroking the shaft gracefully.

“So, will you be coming soon?” Reginald asks.

“Yes! Eh!… wait… what?” For a split second you’re terrified everyone knows what’s happening under the table, as everyone is looking at you with a weird look.

“The tourney, will you be joining us?” Reginald gives a tight smile. “Ahem… I know you’re being distracted by your lady friend. Perhaps you need a room first to decide?”

“!” You freak out a second before you realize they mean Tiana on your arm.

All the other men chuckle, but in reality, they’re all secretly envious. Several of them try to pull their wives closer, trying to show off how lovey-dovey they are with their women too, but the ladies aren’t having it. In fact, most of the ladies are shooting Tiana just as many envious looks. You are two attractive young nobles canoodling at the dinner table, truly springtime has come. The scene would be perfectly pink if you weren’t titty fucking a big-boobed lady under the table. Tiana even has her hand slipped under the table as well, and is helping Britney play with your cock by cupping the balls.

Between, the manipulation of Tiana’s skillful elf fingers and Britney’s soft melons, it quickly becomes too much to bear. That’s not true, you could last as long as you wanted to, but you didn’t want to last any longer. The feeling is much too satisfying! 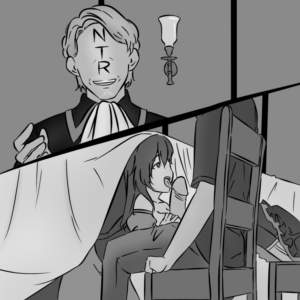 “Ah!” Britney has gotten lost in the feeling of such a large meat between her boobs.

The men are staring incredulously at poor Tiana as she flees the room. The scene she made is enough that none of the men thought about it too closely and realized she couldn’t have possibly made that noise. As a result, no one checked under the table. However, if push came to shove, Tiana embarrassing herself wasn’t really necessary. You would have just cast a spell that made them unable to see her. She might grow suspicious of you and rumors might spread, but it beat being caught with your dick hanging out.

As you spoke, you brought a napkin down to your lap, and then gesture to Britney to take it. She is sitting on her knees in a daze, the concern that she is going to be caught made her so afraid she actually pees herself a little. On top of that, she has gobs of cum all over her face, her hair, and it has now dripped down to her boobs. With the single napkin you gave her, it is impossible to get it back to clean. Suffice it to say, the naughty married woman is left quite the mess as you casually put your thing away, stand up, and leave with the rest of the men and their wives, not even sparing Britney another look.

“Hubby always wanted a baby.” She mutters. “But if it’s his, I wouldn’t mind.”

Had you known this was happening, you probably wouldn’t have cared at all. Although it is a bit silly. All she had to do was ask. You would have gladly made her pregnant anyway.